Last Updated on October 18, 2013 by GrahamWalsh

– So, there is a new update in town and you want it, right? However, if you are running a MSDN version of say Windows 8 Enterprise, you are out of luck.  Microsoft have not released the 8.1 update in the Store for Enterprise users as they want corporate IT departments to roll it out.

Here is a link to the Microsoft page detailing which versions 8.1 will not be coming to.

However, if you have say Windows 8 Pro with Media Centre, head the Windows Store and there is the update as the main feature App.

Going back to my Windows 8 Enterprise build, I downloaded the 8.1 ISO and thought I will mount the drive and install it.  Note that this OS is in Parallels on my Mac so I got this error.

The next trick is to extract the ISO image and see if we can run setup.exe.  Hey presto.  Upgrade works and I have the options of keeping my files and settings. I was also asked to plug in my laptop as the battery was quite low. 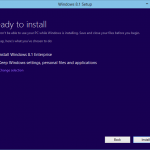