Last Updated on March 6, 2013 by GrahamWalsh

So if you are use to using Lync for IM, Presence, Voice and Video with colleagues and federated contacts, you know how easy it is to do.  Most actions are one click away.  However, if you want to speak to someone who is in a conference room and you want to share content, when you hit the share button, you will hit a brick wall.  Standards based video systems from Polycom, Cisco, Tandberg, Lifesize, Radvision etc etc do not understand the RDP content sharing protocol from Microsoft.  Traditional video uses H.239 or BFCP in SIP environments in a separate stream within the video call.  Content can be transcoded into the Lync video window, which is ok for large images such as PowerPoint slides, but most people want to share both ways.

Polycom have come up with the Polycom RealPresence Content Sharing Suite or RPCSS for short.  This is an application server that is supplied in an OVF format so customers can install on their own VMWare farm.  The solution requires some other components of the Polycom RealPresence Platform such as the DMA and RMX to make it all happen.  However, to the end user, all they need to do is click the Share Desktop or Program button and the Polycom RealPresence Platform does all the conversion in the background.  In the first release, the CSS scales to 10,000 users which will be increased over time.  Along with the first release, only Lync 2010 Server and Client for Windows is supported.

Also, as the server is converting RDP to H.239 or BFCP, this means that it does not just work with Polycom.  It can work with other video vendors too that understand H.239/BFCP.  So this middleware software solution can be used to bridge that gap between desktop and conference room.  In addition, it can work the other way too.  When a user shares content from the meeting room or mobile device, the Lync client will receive the content on the main content stage.  Without the CSS server, the content would appear in the video window of the Lync client making it difficult to read.

Here is what it looks like in action.  For further details, please visit the Polycom website here. 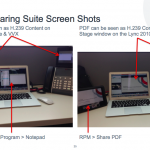