– On Friday 31st May 2013, Polycom took to the sea for an innovative telemedicine event that connected Polycom and Italian Naval sites in Rome, Taranto, Milan, London, Munich, Switzerland and Chicago with two Italian Navy ships—Cavour, an aircraft carrier stationed in the port of Taranto, and San Marco, an amphibious assault ship sailing in the Mediterranean—over Polycom video collaboration.

The day-long training event featured a live laparoscopic surgery broadcast from the operating room on the aircraft carrier Cavour (pictured right). The surgeons demonstrated a live resection of a herniated abdominal diastasis through minimally invasive surgery, which was broadcast through a Polycom HDX 7000 unit inside the theater that was hooked up to the endoscopic surgery equipment.

Polycom technology that was used in this creatively bold scenario also included:

“In my position as a healthcare director for the last eight years, I’ve participated in many presentations and operating theater broadcasts, but hosting one from an aircraft carrier is a first for me,” said Polycom EMEA Director of Healthcare, Government and Education Andrew Graley. “I think it was a first for the Italian Navy too. In fact, you could say it was a double first—two aircraft carriers on the same call.”

Andrew addressed the global audience from our London Executive Experience Center to discuss how healthcare, and in particular video collaboration-based telemedicine, can be used in a more dynamic way to provide care from a distance. He used examples of other successful acute care cases, medical education programs and telemedicine-based projects to illustrate his point.

Microsoft, which shares the Italian Navy Force as a customer, also participated in the event by connecting from our Milan Experience Center to further emphasize the value of video in telemedicine and the importance of workflow efficiencies.

“This was a great showcase of our solutions and capabilities in healthcare!” said Regional Marketing Manager Conchi Garcia, one of the main event organizers along with Demonstration Briefing Specialist Andrea Recupero. Conchi and Andrea, as well as the Systems Engineering team, put forth “above and beyond” efforts to make this event successful.

“The whole event demonstrated to the Italian Navy the flexibility and quality of our RealPresence Platform capabilities at their disposal,” said Andrew. “The Italians are taking a leading role in humanitarian activities in the Middle East, and these features will help them deliver speedy, remote care when it’s needed.”

Here is short clip on Vine of the event from London – https://vine.co/v/bYFwgMThTVw 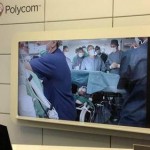 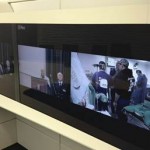 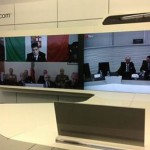 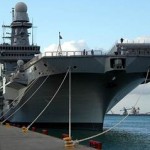