Last Updated on January 27, 2015 by GrahamWalsh

Well I was pleased to hear when Windows 10 was released back in 2014, so I installed it as a virtual machine on my Macbook Air.  Speed along a few months and I sold my MBA for a Surface Pro 3.  I just though the extra touch screen input and the possibility of only carrying one device made sense. My iPad mini now sits at home.

Anyway, I wasn’t brave/stupid enough to install Window 10 on my daily driver.  However, after hearing the upcoming features in the January 2015 release, it got me thinking.  So last weekend I took the plunge and installed Windows 10.

The upgrade was painless and seemed to have kept everything. I had a slight issue with 10 files in my OneDrive, but removed them and copied back in. All OK there.  I did notice the graphics lagging a bit so checked device manager.  Turns out it was using the stock Microsoft Graphics Adapter.

After a bit of research on few forums posts, it mentioned to download the Intel Driver pack and install.  I did that and it didn’t work.  Next up was to run a Windows Update as there was a few fixes over the weekend.  I did this and quick reboot and I have the Intel driver back.

As this is still a beta OS, it is not perfect, but it is good. I spent all day yesterday working on it as a laptop.  One thing I noticed was the ability to scroll the window that was not in focus (this has been on OSX).  A few other nice bits in there too like ATL+Tab is much nicer and I like the Start button now and the ability to change the size. 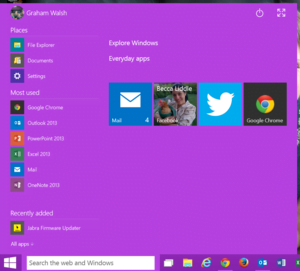 That is it for now, I shall post further updates as I experience Windows 10 and the Surface Pro 3